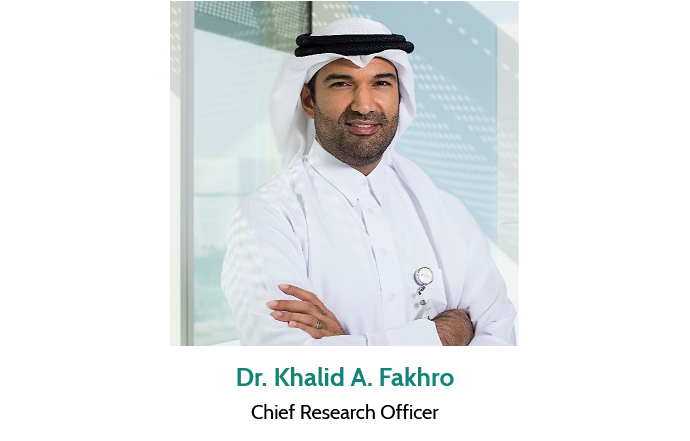 The Human Genetics Department is led by Dr Khalid A. Fakhro. Dr. Fakhro graduated from the University of Chicago (USA) majoring in Biological Sciences with specialization in Cellular Biology and Molecular Genetics, and later completed his PhD in Human Genetics at Yale University (USA), where he was part of a highly selective HHMI Translational Medicine Scholars program, designed to train basic scientists to take discoveries from the bench to bedside. After two post-doctoral training fellowships abroad, he relocated to Qatar as part of the Department of Genetic Medicine at Weill Cornell Medical College in Qatar. He subsequently joined Sidra as Principal Investigator, and became the Director of the Human Genetics department, where he built a robust genomic medicine research pipeline for the hospital. In 2018, he became the inaugural Director of Human Genetics at Sidra, heading an ambitious program where research in genomics and personalized medicine are embedded in the heart of Sidra Medicine’s academic medical enterprise.

The Human Genetics Department focuses on two pillars: advanced diagnostics of patients with genetic disease, and the characterization genomic variation within the Qatari population. The diagnostic track of the department aims to address key questions related to disorders affecting Sidra Medicine’s patients, including understanding what genetic mutations may be causing disease (or susceptibility to disease), and how can this knowledge benefit patient care. Importantly, scientists in the department go beyond identification of genetic variants to investigating the molecular mechanisms of disease. This is done using a variety of tools, including: cellular models, zebrafish and stem cells, etc. These models help scientists better understand what drives disease in patients, opening a window to more targeted treatment. In addition to developing advanced diagnostics and therapy at Sidra Medicine, the department of Human Genetics plays an important role in characterizing genomic variation among Qataris through population genetics studies. This includes studies of population structure, that have identified several key ancestries that make up the fabric of Qatari society, and uncovered different disease susceptibilities that may be higher in one group versus another due to genetic differences. Further, the Human Genetics Department seeks to map the structure of the Qatari genome, which has been shown to harbor a greater diversity than originally anticipated. Finally, population level analysis also uncovers signatures of the pressures that ancestors of modern day Qataris had to face, including identifying variations in the expression of certain genes that make the population more or less susceptible to diseases today. The Human Genetics Department is designed to offer a strong research department in understanding the genetic underpinnings of disease in the context of population-scale variation, to producing high impact research discoveries that change patient lives. Importantly, this is achieved with an eye on building capacity through developing the next generation of young talented scientists, who ensure long-term sustainability in research on Genetics and Precision Medicine in Qatar.