Doha, Qatar, 13 March 2019: Sidra Medicine has successfully performed two major neurosurgeries on young epilepsy patients within a span of ten days. The surgeries mark another first in a series of historic medical milestones achieved by the healthcare organization in Qatar, since opening its inpatient hospital a year ago.

The first surgery was performed on a two year old girl at Sidra Medicine’s new neurosurgery intra-operative MRI theatre suite (IMRIS). Sidra Medicine is one of the few women and children’s hospitals in the region to have a dedicated pediatric IMRIS suite as well as several flagship pediatric sub-specialties including neurology, craniofacial and plastic surgery, urology and cardiology.

Alaa had a medically intractable epilepsy resulting in uncontrollable seizures multiple times a day, thereby increasing the risk of injuring herself. Her condition was not responsive to epilepsy medication and other non-invasive treatment options. Patients with intractable epilepsy also face the possibility of sudden unexplained death if they have seizures during their sleep. This happens to a small proportion of epileptic patients with risks increasing as they grow older.

Alaa’s pre-surgery consultation included diagnostic imaging with nuclear medicine and radiology to identify the abnormal tissue in the right side of her brain that was causing the epileptic seizures.

She was referred for neurosurgery by Sidra Medicine’s Division of Pediatric Neurology’s new sub-specialty Multidisciplinary Epilepsy Surgery clinic. The clinic consists of experts from neurology, neurosurgery, nuclear medicine and radiology.

A team consisting of 21 medical and surgical professionals, led by Division Chief of Pediatric Neurosurgery Dr. Ian Pople and Neurosurgeon Dr. Khalid Al Kharazi, conducted the surgery for several hours including an hour for the use of the intraoperative MRI.

Dr. Ian Pople who joined Sidra Medicine in late 2018 from the Frenchay Hospital in Bristol and specializes in all aspects of pediatric neurosurgery said: “Alaa’s surgery was highly complex as it also included electrical monitoring, to ensure that we didn’t stray into areas of the brain that were related to mobility. After the abnormal tissue was removed, we scanned her brain immediately with the MRI suite to ensure that no residual abnormal tissue was left. Our ability to do such advanced surgery is indicative of the level of expertise that we have in Qatar as well as the investment that the government of Qatar has made in offering state-of-the-art care.” 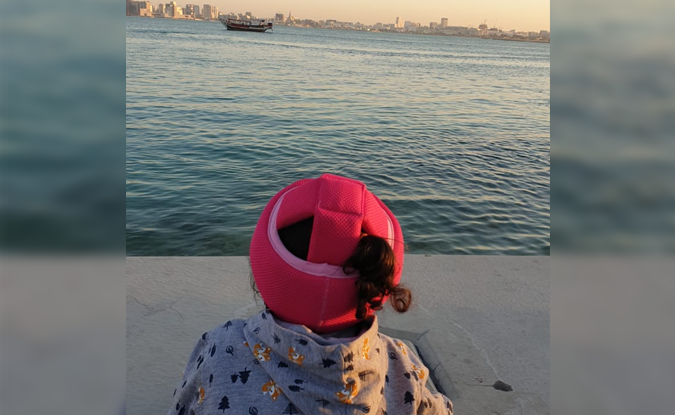 Alaa’s mother said: “We are truly grateful that our child had an opportunity to have this life saving surgery in Qatar. We were initially very worried about her having to undergo major surgery at such a young age. However, we also realized that the longer we delayed it, the higher the risks were of injuring herself. We even sought a second opinion from Europe and were very reassured when we were told that the surgery and care that our child was receiving at Sidra Medicine from experts in neurology and surgery was at best practice global standards.”

“It is every parent’s wish to do the best for their children and we could not have asked for a better hospital and medical team, particularly under the care of such experienced surgeons such as Dr. Ian Pople and Dr. Khalid Al-Kharazi and our neurology nurse practitioner Kathleen Teta. Since the surgery, we no longer have to worry about the seizures and our daughter is happy and healthy. Thank you Sidra Medicine and Qatar Foundation for bringing this specialized hospital to Qatar. You have not only changed the life of our daughter but ours too!” Alaa’s mother continued.

Read more about Alaa's story from her mother's perspective here.

The second neurosurgery case involved a 12 year old girl who had been suffering epilepsy for many years due to a benign tumor in the front of her brain. With multiple seizures a day, she was at constant risk of injury. She too was referred for surgery by the Multidisciplinary Epilepsy Surgery Clinic at Sidra Medicine.

The patient’s surgery, also conducted by Dr. Pople and Dr. Al-Kharazi, involved the removal of the tumor and surrounding abnormal tissue. Since the operation, the patient has already seen her seizures reduced and is now on a medication program to help manage her condition. It is hoped her seizures will eventually stop completely.

With the launch of the epilepsy neurosurgery at Sidra Medicine, pediatric patients in Qatar and the region now have access to state-of-the-art equipment and an international team of experts able to perform the most complex surgery and treatment procedures, eliminating the need to travel farther abroad for care and treatment.